It exhibits an excitation maximum at 587 nm and an emission maximum at 610 nm with a fluorescent quantum yield of 0.22. mCherry shows high photostability and resistance to photobleaching. It also shows improved gloss and an extremely fast maturation rate. Anti-mCherry, clone1C51 is an affinity-purified antibody that recognizes mCherry in HEK293 cells transfected with pFin-EF1-mCherry. (Ref .: Schaner, NC et al. (2004). Nat. Biotechnol. 22 (12): 1567-72). 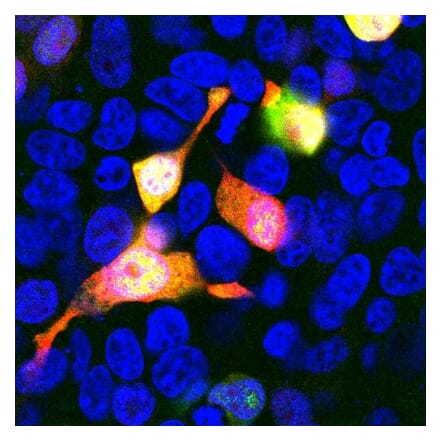 1. Anti-mCherry antibody, clone IC51, cat. No. MAB131873 detects the mCherry protein and is tested for use in immunocytochemistry and Western blotting.

~ 32 kDa observed; 26.72 kDa calculated. Uncharacterized bands can be seen in some lysates.